Netball is a ball sport played between two teams of seven players. Netball is popular in Commonwealth nations and is predominantly played by women. Games are played on a rectangular court divided into thirds, with a raised goal at each short end. The object of the game is for teams to score points by passing a ball and shooting it into the opposing teams goal. Players are assigned "positions" that define their role within the team and restrict their movement on court. During general play, a player with the ball can take no more than one step before passing it, and cannot hold the ball for longer than three seconds. Goals can only be scored by the assigned shooting players, and successful shots score one point each. Netball games are 60 minutes long, divided into 15-minute quarters, at the end of which the team with the most points scored wins.
The sport is administered globally by the International Federation of Netball Associations (IFNA), and is reportedly played by over 20 million people in more than 70 countries. Here we are manufacturing and supplying of wide range of premium quality of Netball Equipment like Netball Ring, Netball Posts, Netball and Netball Bibs with international standard criteria. 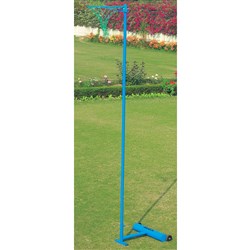